On October 26th, The Diocese of Central Newfoundland met for a special session of synod to make a decision on marriage equality. In his Charge to Synod, which took place the night before, Bishop John Watton began by acknowledging that it has become very clear that we are standing looking forward, and that the church of today is not what it used to be. He shared his own story of coming back to the church for the baptism of his child 35 years ago after he had come to a place in his own life where “to be honest, we didn’t care much about religious values, culture, or practice.” He had grown up with an impression of God as a tyrant to be feared, and didn’t trust the church. But during that return to church, the rector of the parish called him by name, and Bishop John said that it was as if God was telling him that he doesn’t hate him, but loves him. It was for him “a Holy Conversation.” 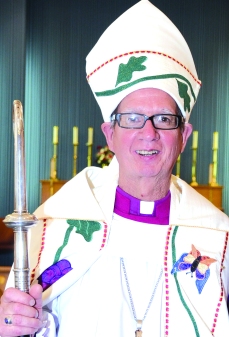 Bishop John went on to talk about the patience shown to his family as confused but enthusiastic members of the Anglican Church. He spoke of the generous ways that we today listen to the “pain of Indigenous peoples, oppressed women, sexual and industrial slaves, belittled minorities; people who have been and still are being trapped in the darkness of human greed and capitalist avarice.” He stressed that these conversations that are now taking place within the Anglican Church of Canada about LGTBQ+ people is about justice and about listening to the Holy Spirit.

The official wording of the motion that came before synod was as follows:

Therefore, be it hereby resolved that: This Synod of the Diocese of Central Newfoundland accept and endorse the document “A Word to the Church” and the “local option” as set out in the declaration of the House of Bishops, and on that basis affirm the authority of the Bishop of the Diocese to allow parishes and congregations which formally request permission of him or her to perform same sex marriages to do so.

The vote was by secret ballot, and it passed with 87% of those present circling yes on their ballot.