For the full article by The Rev’d Fred Marshall, see the November print issue of Anglican Life: 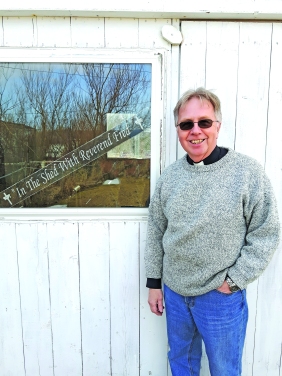 As a newly ordained priest in my first parish consisting of congregations in Arnold’s Cove, Come By Chance, North Harbour, and Sunnyside, I spent most of the first year listening and observing. One morning while facing the congregation at Saint Michael and All Angels in Arnold’s Cove, I wondered “where are the men?” The community of Arnold’s Cove had a population of approximately 1,000 people and it was estimated that at least sixty percent had an Anglican background. Average Sunday attendance would be less than 35 people, the great majority of whom were female. While some were widows and there were a few men, there is an obvious disconnect in the number of men attending worship. Where were the men and why did they not come to church?

One of the things that I discovered is that a common interest and a place for men, especially in rural areas, is “the shed.” Entering the shed is informal and less intimidating than entering the Lions’ Den or the Church. In the shed everyone is equal. In the shed you can engage in conversation or just sit and listen. In the shed seemed to be a good place for men’s ministry. When the decision was made to have a place for men to gather, men showed up to help prepare a shed behind the rectory and next to the church. Installing a wood stove was a must.

Each year approximately 60 men took part in the project with 20 to 30 attending on Thursday evenings. It was so wonderful to see three generations participate in the project. While they were welcome to attend on Thursday evening, women often dropped by on other days “to see what the men were up to.” An official launching and christening of the boat became part of the Arnold’s Cove Heritage Committee’s opening ceremony

If you wish to check out the amazing fellowship “In the Shed with Rev. Fred—Building a Boat—Building Community” visit our parish Facebook site – https://www.facebook.com/parishofthelivingwater/   I pray you will “Like” us and spread the Word.