The Chi Rho (pronounced ˈkī-ˈrō) is a very familiar symbol to those of us who frequent churches where vestments are worn and hangings are used. It is often seen on the back of chasubles and on Eucharistic vessels. It is an ancient christogram, and is formed by the combination of the first two letters of the word “Christ” in Greek, which is Christos (ΧΡΙΣΤΟΣ in Greek). The X and the P come together to form the symbol so that the vertical part of the Rho connects with the centre of the Chi.

The origins of its use are said to stem from a dream that the Emperor Constantine had in which he was ordered to put a “heavenly divine symbol” on the shields of his soldiers. Having done as the dream ordered by putting a symbol that very closely resembled today’s Chi Rho on the shields, the army went on to defeat its foe in battle. The success of this conflict was credited to divine protection, and the drowning of the losing military leader in the River Tiber was likened to the drowning of Pharaoh in Exodus. 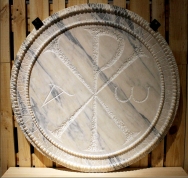 Later, the Chi Rho was further understood as a symbol not just of Christ, but of his resurrection and victory over death. In that case, the simple Chi Rho was often depicted in a circle, within which were also the Alpha and Omega—the beginning and then end of the Greek alphabet—as Jesus said that he is the Alpha and the Omega.

This ancient symbol of Christ is still frequently used today in modern Eucharistic ornaments, and there are many ancient examples of its use that we can see as well.